The script is a simplified version of the Land Surface Temperature Mapping Script [1] calculating only maximum LST for a selected time period or land surface temperature for a specific satellite image. Average and standard deviation LST are not included, as they have a problem of detecting cloud coverage into the calculation. In order to enable comparison of LST, the functionality of adding multiple data sources was used.

How exactly LST is calculated is explained in the Land Surface Temperature Mapping Script [1], which is based on multiple scientific articles [2,3,4]. Calculation is done on the basis of bands 4, 5 and 10. If the user chooses so, it can be also calculated on the basis of band 11 for Landsat 8 L1. Preselected coefficients and indices are used (surface roughness, NDVI, etc.). Nevertheless, user can adjust that according to the scene.

In this script, maximum LST is calculated for at least two instances of Landsat L8 data sources. The color of the output tells us if (maximum) LST was higher in primary (red) or additional data source(s) (blue). For each color a gradient is used in order to have visible areas with higher and lower LST.

The script is globally applicable. As the analysis is multi-temporal, it should be somewhat resilient to clouds, when there is s significant number of images with no cloud coverage.

LST calculation is based on preselected coefficients and indices, which are approximate in land type detection (bare soil, water, etc.). This then affects calculation of LST.

When comparing data sources with non-significant LST temperature differences, result on which data source for specific time period had higher maximum LST can be mixed. This could be because of already mentioned approximate land type detection. In addition, there could be also other reasons. Usage of this script is limited by how many images are actually available and in which part of the day satellite recorded the image. This means short heat wave could be easily missed, image was not recorded at the hour of the peak for specific day or it was recorded right after a short storm which cooled down surface. This was not tested, but probably fires and snow coverage affect the result as well.

Also if in selected time period there are only images with cloud cover, script is not applicable.

Script should easily work with 2 data sources and for both selected timespan of 1 year. User can also add as many additional data source as they want. However, we it was not tested what is the limit of OE Browser.

Even with mentioned limitations script can be used at least for fast comparison of (maximum) LST between selected periods as a basis for further detailed analysis.

In EO Browser, the user must select Landsat 8-9 source, preferably L1, but also L2 can be used. At least one additional data source must be added for Landsat 8-9. For all data sources, a desired time period is selected, to compare maximum LST. Alternately, users can also compare specific images (non multitemporal) or even a mix of both - LST from a single image with the maximum LST for a specific time period.

The user then configures settings in the script. Below is an example of primary and one additional data source.

Primary data source should be element “0” of the above list!

The next option is band selection for calculation of LST. B10 is usually used:

The last setting is the expected minimum and maximum temperature of the scene. For example, if analysis would be for summer months, settings could be:

This affects the color generation for the output.

The highest temperature was observed at Heathrow Airport on 19.7.2022. On the basis of this information, the maximum LST can be compared for the July 2022 (primary data source) with the maximum LST in July for previous years.

Generally, it is expected that the output would be a red gradient, which would mean that the maximum LST was in 2022. However, as there were also other heat waves present from 2013 till 2020, that is not always the case. In addition, as explained in the limitations chapter of the script, the preselected coefficients and not-available satellite images at the peak can also affect the result.

Comparing with an additional data source for July: 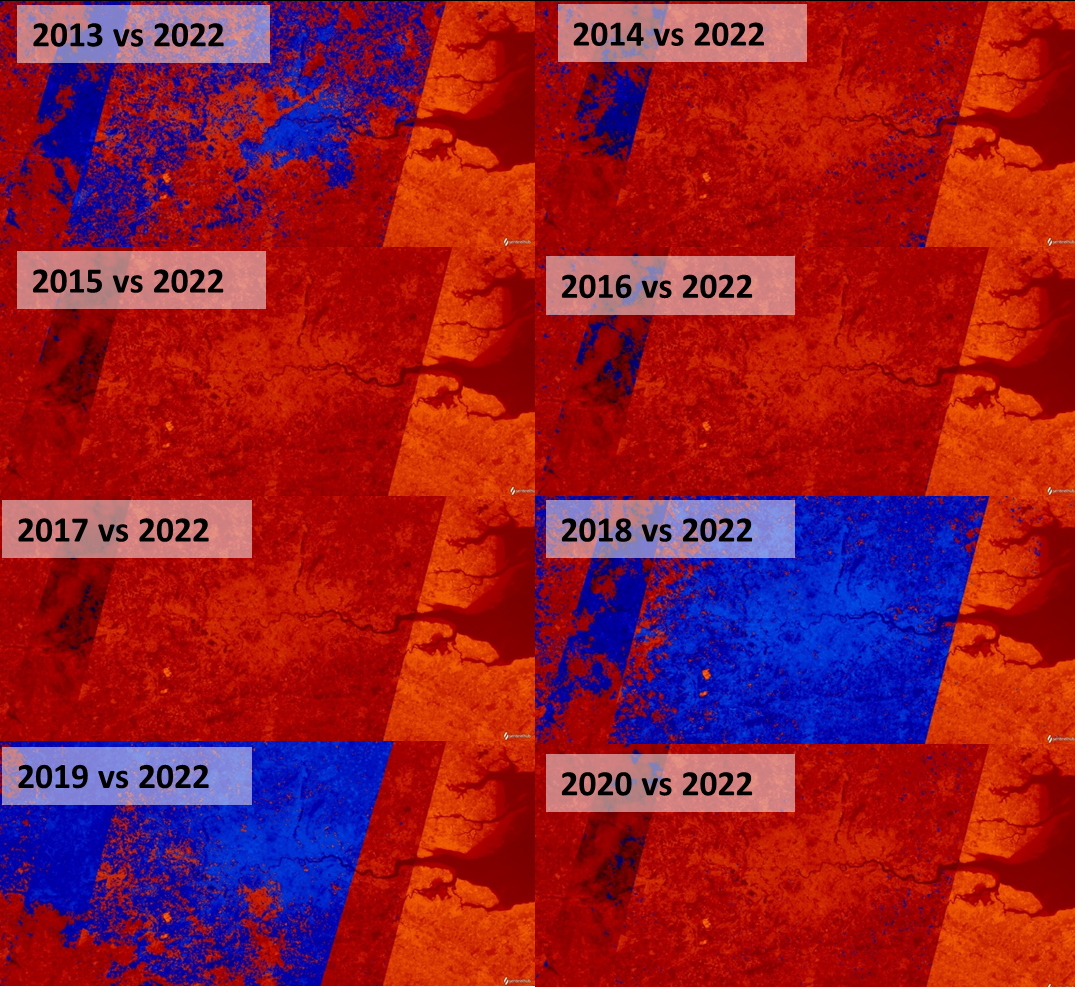 As for the rest of the Europe, summer 2022 brought an extreme heat wave to Slovenia as well. The monthly mean temperature of Lake Bohinj was measured as the highest in the time period between 1939 and 2022 [11]. The focus of this example is therefore to compare maximum LST of 2022 with previous years in July and August. As there is Lake Bled nearby, that one was also added to the example.

In 2013 there was an extreme heat wave. The comparison of maximum LST between 2013 and 2022 shows that Lake Bohinj had higher temperatures in 2022 (image below).

Part of the reason for high temperatures of Lake Bohinj in 2022 is also amount of snowfall in mountains [11]. This means less melted water in the watershed of Lake Bohinj and faster warming of the lake in spring. “